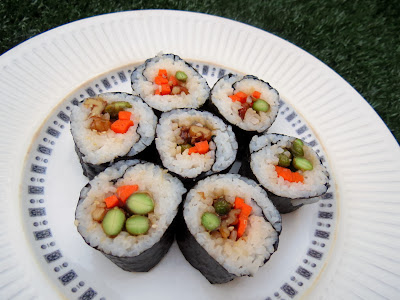 Johanna promised that this was a recipe for jaded sushi lovers. But I reckon it's been a year since we last rolled our own sushi at home (case in point: we had no idea where the sushi mats were stored in our 7-month-old kitchen) and I've rarely eaten it out in the interim, so I was probably easily pleased. 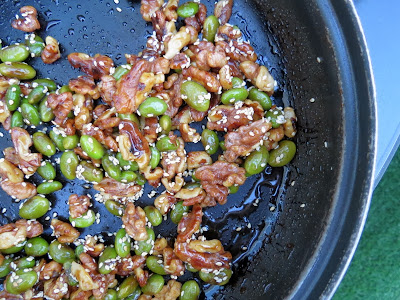 This is certainly a pleasing alternative to the usual run of avocado and cucumber in vegetarian sushi rolls - a sweet and salty, protein rich medley of walnuts, edamame and sesame seeds. I decided to team it with some julienned carrot, oblivious to but happily in sync with the original recipe.

We struggled a little to reclaim our rolling technique after our accidental sushi hiatus but formed three large edible-if-mishapen hand rolls - a lovely late-summer dinner.


Edamame & walnut sushi filling
(a recipe from Green Gourmet Giraffe,
where it's credited to Food and Wine)


Prepare the basic nori roll recipe. While the rice is cooling, place the sesame seeds in a frypan and heat them for a few minutes until toasted. Remove them from the pan and return it to the heat.


Pour the oil into the pan and add the walnuts. Toss and toast the walnuts for a few minutes, until crisp and fragrant. Add the edamame, maple syrup and tamari. Keep stirring it all as it cooks until the sauce thickens, around 5 minutes. Turn off the heat and sprinkle over the sesame seeds, allowing it all to cool down for a few minutes.


Julienne the carrot. Arrange the carrots and edamame-walnuts as filling in the sushi.
Posted by Cindy at 12:11 pm