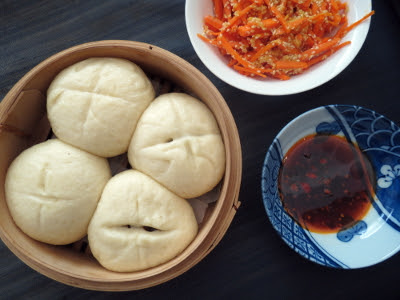 So all that seitan silliness was in the pursuit of making our own vegan cha siu bao from scratch - sweet steamed dough pockets stuffed with an even sweeter minced mock-pork. In Melbourne we have some privileged access to these at restaurants and groceries, but attempting to make them at home is my kind of Weekend Project. The hardest work had already been done for us - ErinWiko developed a recipe for such a thing during the 2011 Vegan MoFo. 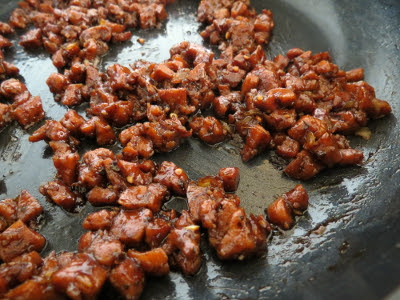 I was prepared for disappointment - there was a lot we could stuff up. The seitan was off to a shaky start, but developed a pleasing texture as it browned up in the frypan. I wondered if ErinWiko could really have pulled off the saucy barbecue formula. She really, really had. Look at that juicy filling above! It is some meaty mock, and the flavour was everything I hoped for. 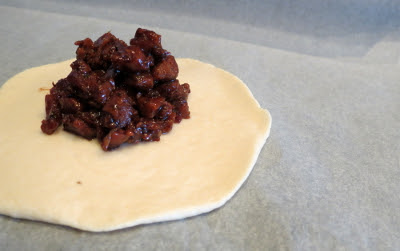 The bun dough was still a complete unknown. Our yeast was beyond its expiry date but still mercifully foamed up as needed. The dough expanded and was obligingly elastic as I pulled it over the 'pork' and pinched it closed. We made eight greedy, easier-to-divide buns and as you can see from the top picture, they totally took over our steamers. Still skeptical of our success, I prodded them after the instructed 10 minutes' steaming - they still looked like uncooked dough. Nope, these had a firm skin on them... 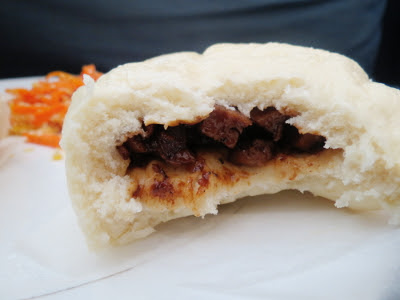 ... and a fluffy, puffy interior! Win, win, win. Seriously, I cannot imagine how these buns could be bettered. Massive kudos to ErinWiko for demystifying beautiful barbecue bao.

In a large bowl, mix together the flour, baking powder and salt. In a small bowl, whisk the sugar and dry yeast into the warm water. Give it a minute or two to check that it's foaming and live. Pour the yeasty water into the flour bowl and mix it all together thoroughly to form a dough. Lightly flour a clean bench and plonk the dough on it, kneading it for 5-10 minutes until smooth. Spray a clean bowl with oil, place the dough in it and roll it around to coat it in the oil, then cover the bowl with a tea towel. Leave the dough in a warm place to rise to double the size, about an hour.


When the dough is ready, divide it into 8-12 equal portions (depending on how big you like your buns). Lay out some baking paper to work on. Use a rolling pin to roll each portion into a circle, slightly thinner around the edge than in the middle. Spoon some seitan filling into the centre, then gather up the dough edges to fold it around the filling, pinching it together to close. Cut a small square of baking paper and set the bun seam side down on it, transferring it to a steamer. Repeat with the remaining dough and filling.


Steam the dumplings for 10 minutes and nom, nom, nom.