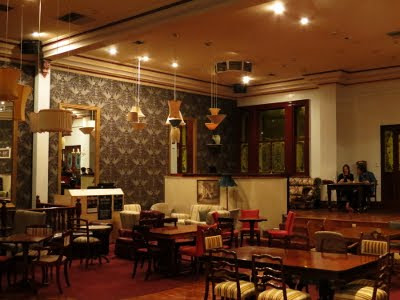 Michael got wind of the newly opened Spotted Mallard on Mess+Noise and immediately scheduled it in for pub club. The menu looked alright (solid vegetarian options, though nothing vegan or gluten-free was clearly marked) and I suspect Michael wanted to scope the venue for trivia.


The interior is quite striking and hints at the premises' previous lives as a French restaurant and, before that, a Greek wedding venue. The stained skylights, antique chairs, wall mirrors and lampshade clusters had a few of us questioning whether this really counted as a pub. The tone of the menu, the bar service and the downstairs bandroom settled it for me. The main vegetarian offerings are a burger and an eggplant parma, and the meat-free snacks currently include marinated olives, spiced nuts, chips, hoummus and fetta on Turkish bread and chickpea fritters. 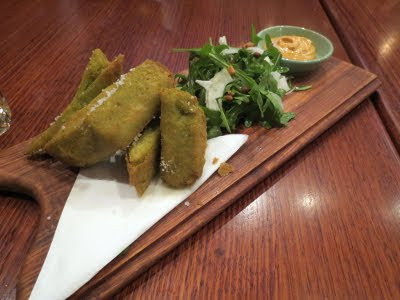 I checked out those chickpea fritters ($12). They're eerily similar to the ones I enjoyed at Mamasita, though here they're served with a superbly smoky chiptole mayo. The rocket, fennel and pine nut salad rounded out this dish nicely, though I wish it had been served on something more dish-like - flat boards just mean spills for all but the most dextrous diner. 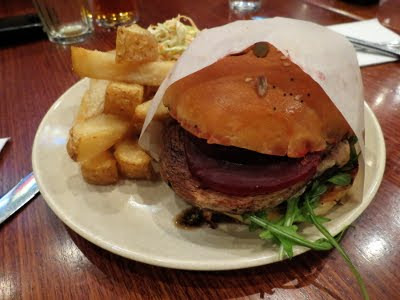 Michael ordered the Spotted Mallard Vurger ($19), which was a messy but tasty experience - the brioche bun was stacked with a grilled portabello mushroom, pickled onion, beetroot, goats cheese, tomato relish and rocket. The thick Jenga-stacked chips were better still, though the coleslaw didn't excite. 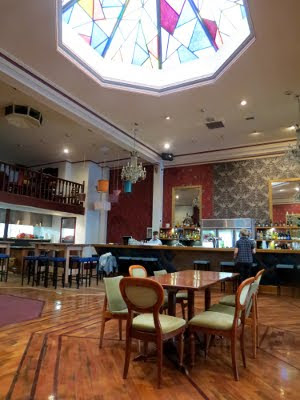 The Spotted Mallard has been open little more than a fortnight, so it's hardly surprising that the dining area was relatively quiet on a Tuesday night.  Our group of more than a dozen pub clubbers had their pick of the tables and probably constituted half of their evening's customers. However, in even this not-even-quarter-full circumstance, the kitchen couldn't keep up. Some of our friends waited up to an hour and twenty minutes of their food to be served. We wouldn't like that at a busy restaurant, and it's even more irritating to experience at a quiet one.


Once fed, everyone spoke well of the food at the Spotted Mallard. It's a really pleasant space and the staff are friendly too. Let's hope they work out how to streamline up their kitchen operations.


Accessibility: The Spotted Mallard's dining area is located up a wide flight of stairs, and some tables are accessed via further stairs; we didn't see any alternative means of entry. Tables are well spaced. All food and drinks are ordered and paid for at a high bar, then food is delivered to the table. We didn't visit the toilets.
Posted by Cindy at 4:36 pm