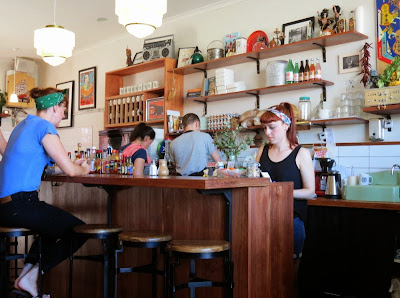 Because Cindy and I are home-owners these days, we occasionally find ourselves heading up to Coburg to visit Bunnings (real talk: we have been planning some sort of cat shelf system for Zimbra for more than a year and are finally making progress). A visit to Coburg is an excuse to branch out from our usual Brunswick haunts - to hit up Half Moon instead of Mankoushe, or Little Deer Tracks instead of A Minor Place. On this occasion, we opted for a return to True North, the vegan-friendly, diner-y Coburg cafe that wowed us earlier in the year. 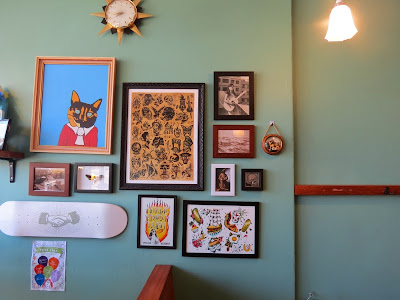 Not much seems to have changed - the staff are still super friendly, the menu loaded up with vego and vegan dishes and the atmosphere buzzing without being so busy you feel rushed or crowded. Oh, the other thing that hasn't changed? They still sell out of the waffles pretty early, so Cindy's heart was once again broken (and not healed by the fact that they were also fresh out of pies, leaving her forced to forgo breakfast sweets). When she recovered, she ordered the vegan bagel - a 5 and dime bagel, filled with avocado, herb-infused oil, lemon and chilli ($9.50) plus an orange juice ($4). 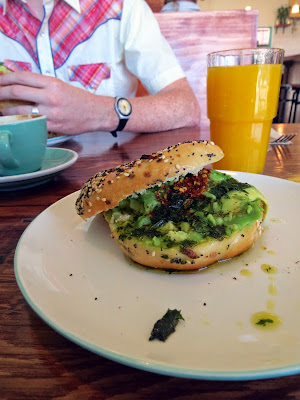 The traditionally boiled bagel proved a trial for Cindy to cut with the cutlery she had, but once she figured out how to actually eat it, this was an impressive mix of perfectly ripe avo, a decent chilli hit and a good mix of herby flavours, all slathered in oil. The kind that's good for you though, I'm sure.

I nearly went back for a second round of baked eggs, but instead tackled the Hot Poppy (chorizo, haloumi, spinach and avocado on toasted ciabatta, served with corn chips, $13). 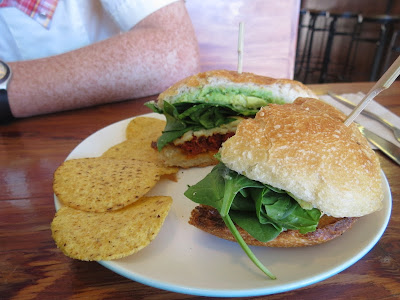 I veganised the chorizo, but not the haloumi (they have an option apparently!) and found this a delightful sandwichy breakfast - their mock chorizo is nice and spicy, and combining it with haloumi and more perfect avocado is always going to be a winning move. Plus: corn chips for brekkie!

True North hit the mark for us again - great, affordable food, excellent coffee and friendly staff - it's a pretty safe formula for success. I just really hope that they can hit Cindy up with something sugary next time we go back - I'm not sure she can handle more disappointment.

Read about our first visit to True North here. Since we stopped by, Veganopoulous, Quinces and Kale and The Good Hearted have all enjoyed True North's vegan delights and Cate's Cates and A Place a Day have given the eggy vegetarian dishes the thumbs up.
____________

True North
2A Munro Street, Coburg
9917 2262
menu: 1, 2 (they've just advertised a new menu on their facebook page, but the main change seems to just be a shift from the specials board to the main menu for the Hot Poppy).
facebook page

Accessibility: There's a small step on entry and a pretty crowded interior (especially on the weekends when the stools at the bar are in use). You order at the table and pay at a medium height counter. The toilets are out the back via what looked like a carpark - we didn't visit, but they'd require negotiating a step or two at least.
Posted by Michael at 9:11 pm